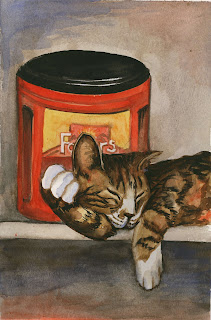 Kitty
Marty did not mean to laugh when Joel asked her if she had coffee.
“We have coffee.” She pointed to the shelf where there was a cat asleep next to a red can of Folger’s coffee.
Kitty was doing what any good natured tabby cat would do; sleep. Marty’s store was no Safeway. It was not even a 7-11 by any stretch. She would make monthly trips to her local Sam’s Club near Gunnison. She was sure to stock Ice cream for the reach in freezer, (this was consumed mostly by Grandpa Henry and Jessie.) Various chips, canned food, bottled water. The people who came to her store were frequently lost. The road up the hill dead ended onto Joel’s property. They would ask for gasoline (which she did not sell) or water or softdrinks, and sometimes Henry’s stash of ice cream bars.
It did not dawn on Joel that his quest for coffee seemed strange to the store owner. That’s why she asked him if he was lost.
When Joel reached for the can of coffee, Kitty did not flinch or skip a beat of his well deserved nap.
Posted by crow productions at 12:01 PM No comments: 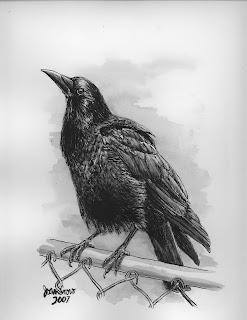 When Joel walked into the Little Store at Miner’s Pass, he was greeted by a squawky “Hello”. There was this crow dancing on a perch near the front counter.
Inky the crow came to Dr. Finn’s veterinarian clinic several years ago. His left wing had been shot and the bullet had shattered the bones.  Marty patched him up as best as possible, but he could never fly again. Marty offered him her home and he accepted. She found it was like having this very bright being, if not a black feathered clever child.

Inky knew several things to say; "Hello." He had mastered,
"Fuck, I mean heck." He must have picked that up from Doc Marty trying not to cuss. "Shush don't say that Inky."
Posted by crow productions at 11:29 AM No comments:

Search and Rescue Helicopter Pilot
Dr. Marty Finn was a search and rescue helicopter pilot. Here she had successfully landed on this rock. There were two climbers stranded there because one had a broken leg. They talk about how that lady pilot skillfully saved their lives.
Marty was ten years old when her mother passed away. Poor old Henry raised that girl alone.
Henry Finn had been a pilot for the county with search and rescue emergencies for thirty-five years. After some major heart problems, he was forced to retire.  Henry also flew the SAR helicopter the county stored at Miner’s Pass landing strip.
Marty was determined to follow in her father’s footsteps. She had learned to fly the Cessna 182s single engine plane her father owned before she went away school to became a paramedic.
She was also determined not to let her past heartaches show.

People that knew Marty well, knew she was an injured soul.
She had this in common with Joel.
Posted by crow productions at 6:37 PM No comments: 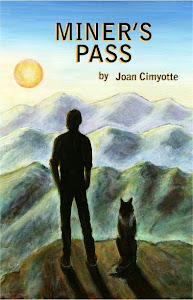 crow productions
I learned to paint when I was eight. I picked up guitar when I was twelve. I was young when I had children and did not start any sort of career. I was bitten by the theatre bug in my early thirties. I've painted so many sets that it is difficult to count them all. Sets are not a permanent thing. They are much like the actors that play on them, transient in their importance. As soon as the show is over, then it is taken apart and destroyed. I had to quit my job at The Arvada Center in Colorado, when my back could not take it anymore. For the last five years I have been home mostly writing and painting paintings. It is what I dreamed about doing to make a go of it as a fine artist. There are moments when I truly feel that I am running in place.